With Yandex
With Mail.ru
With Google
With Vkontakte

With Yandex
With Mail.ru
With Google
With Vkontakte

The main stage of the development of the version 13.2 is completed. The version is now on testing and preparation stages but for now we suggest that you read information about some new features of the upcoming version.

The following changes have been developed and implemented: 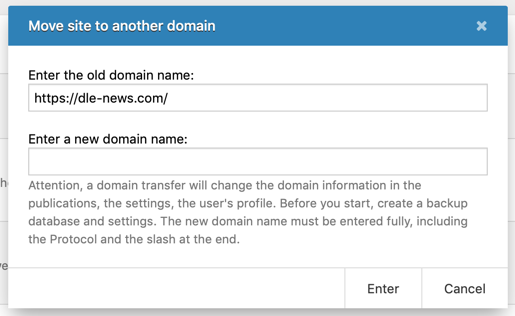 1. Domain transfer wizard is added. Now you can easily change you website domain. The wizard will automatically replace your domain in publications, comments, static pages, banners and user avatars. This wizard is launched from the control panel, in Engine Settings, next to the website address setting. 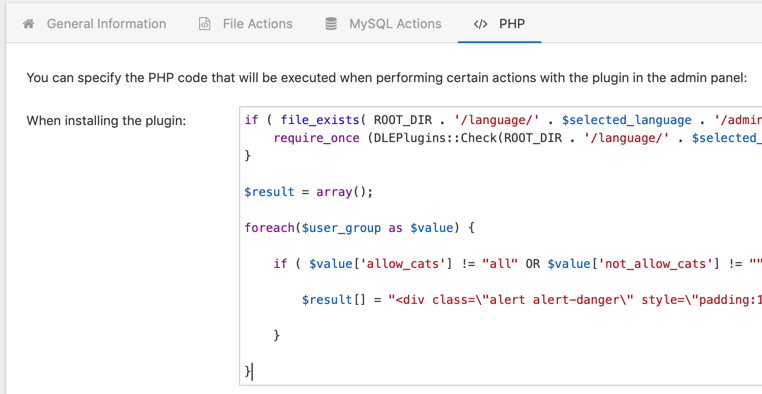 2. Now in the plugin system you can specify the executable PHP code which hooks to the plugin installation, update, enabling, disabling, and deletion events. It allows you to modify plugin behavior on specific actions.

4. Now in the plugin system you can specify that a certain plugin is required for correct work of another plugin. In plugin settings you can specify a name of another plugin that must be installed. In this case, this plugin will be executed after the execution of the main plugin. Thereby you can create add-ons not only for DLE itself, but also for plugins and create plugins for plugins.

5. In the plugin system line breaks are now performed correctly in the replaced code if it is at the very beginning of the code with which it should be replaced or added to.

6. Now you can use the {engine} tag for MySQL queries used in plugins, which indicates which MySQL engine DLE uses to create database tables. Values may be InnoDB or MyISAM.

7. Changes are made to the plugins installation and enabling system for cases when the plugin does not meet the requirements. For example, in cases when a plug-in requires a specific version of DLE, and the installed version of DLE does not match it, the plugin will still be installed but it will not be enabled. It allows a user to edit the plugin in the future, and make the necessary changes to it directly from Administration Panel. The same goes for the rest of plugin requirements. It will be possible to enable the plugin only if non-compatibility has been eliminated.

9. Lazy image loading is added for publications. This feature can be enabled in the engine settings in the control panel. When this option is enabled, the images in the news will not be loaded by the browser on the page opening. They will be loaded as they are within browser’s viewport or nearby its borders. This feature allows you to improve the page loading speed and reduce the server load.

10. Now reCAPTCHA v3 is supported. With this type of captcha your users will no longer have to select any pictures and perform any additional actions on the site to verify themselves. The user is checked for being a bot or not in the background, unnoticed by your visitors. Before enabling this type of captcha, be sure to generate a new Google token key specifically for reCAPTCHA v3.

11. Now manual changes to .htaccess file located in the root of the site are kept in case of the engine auto-update. Contents of this file will not be completely replaced after the engine update. Only necessary changes will be made the in the standard functions. Thus, all manual changes made to it by the owner of the site will remain unchanged. The same is done for the cron file, which you configure to perform your actions on the cron.

12. Changes are made to the process of automatic engine update within the same major version. When patches with error corrections within the same version of the script are released, only installation of changes in the form of a patch will occur, updating only the changed files, not all the files as it was before.

13. Now a selected category can be automatically recognized in an article preview, and if a separate template is assigned to it, then a proper preview template will be loaded for this category. Thus, if different templates are assigned to different categories, all of them will be used in the preview. 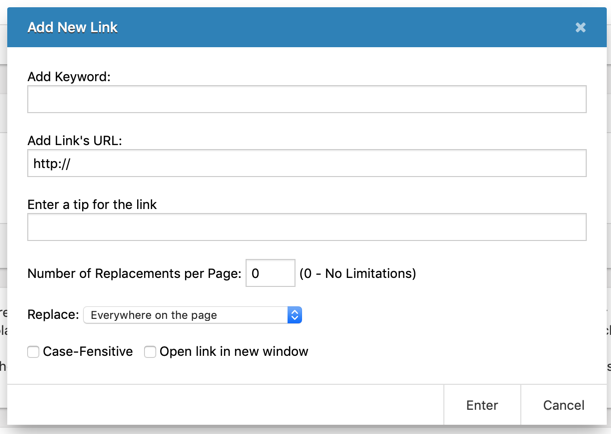 14. Now you can use hints for links in Cross-Reference module in the control panel of the engine (title attribute). This feature allows you to improve SEO optimization, as well as improve the experience from your site for people with disabilities.

18. Now loading and processing images in WEBP format is supported. Images in this format can be directly uploaded using the DataLife Engine. The engine will create thumbnails and watermarks if necessary.

21. Now you can specify several values separated by comma in [ifxfvalue tagname="tagvalue"] Text [/ifxfvalue] tag which shows the enclosed text if the tag value matches the specified value. For example, text within [ifxfvalue city="New York, Paris, London"] Text [/ifxfvalue] tag is shown only if an extra field named city contains one of specified values. It greatly simplifies the template layout for various cases.

22. Now there is a search for advertising materials management system in Administration Panel. You can search by name, description, and by the ad code.

23. A more informative visualization of whether a banner is displayed or not has been added in the banner management section of Administration Panel. For example, if a banner has display limitations by time, views or clicks, and the limit has already been reached, then in the banner editing section it will also be shown that the banner is currently off.

24. Now you can search by news and static pages on mobile devices (smartphones, tablets) in the engine control panel. 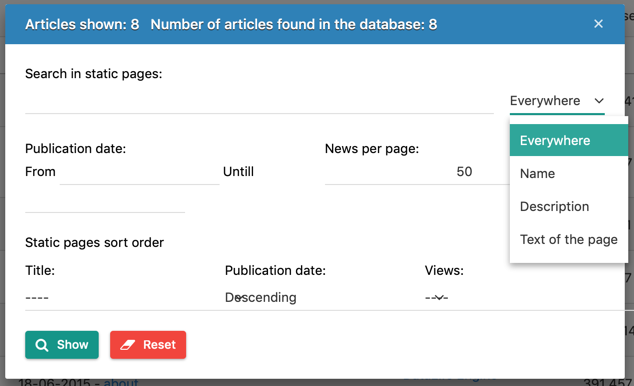 25. Now you can choose a search area in advanced static pages search. You can search either by all fields, or separately by name, description, and text of a static page.

26. Static pages search algorithms have been significantly improved. Now the search is more accurate, and gives you better results according to the specified search criteria.

28. The performance of DataLife Engine has been significantly improved and the database load has been reduced when displaying publications by keywords from the tag cloud.

29. The performance of DataLife Engine has been significantly improved and database load has been reduced when showing publications found with help of extra fields that have "use as cross-references" property. 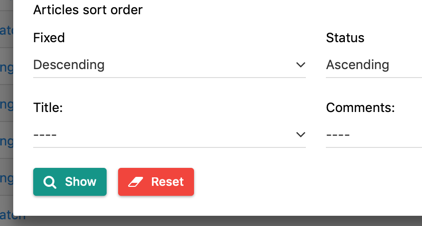 31. The limit on the number of characters for Description meta tag for static pages has been increased to 300 characters. This limit now corresponds to the limit set by the Google search engine to display this information in search results.

32. Changes have been made to forming mechanisms of the og:image meta tag used for posting data to social networks. Now, if an article has an annotation, then this tag will form a link to the full original image. Thereby, social networks containing restrictions on the minimum image size will receive the maximum possible original image quality.

34. Added the ability to use commas when writing descriptions in extra fields of "image" and "image gallery" types.

35. Now you can use plus symbol as a value for extra fields of "Cross-references" type. For example, you can use values ​​such as C++.

36. Now such characters as double quotes, plus, and others are supported for keywords intended for a tag cloud of publications. Almost all restrictions are removed on characters in the cloud, leaving only restrictions on the use of HTML code.

37. For the RSS feed template, now you can use HTML code split into several lines, used to generate turbo content for Yandex.

38. Processing of transparent PNG images is improved. Application of watermarks for these images is also improved.

40. Now you can use space as a separator for list of cross-references in extra fields if "Use field values ​​as cross hyperlinks" option is enabled for these fields.

41. TinyMCE and Froala visual editors are updated. A number of detected errors is fixed in these editors.

42. An issue is fixed with the incorrect work of control system for incorrect friendly URLs for article extra fields of cross-reference type if the values ​​of these fields contained quotes.

43. An issue is fixed where articles sent to moderation could be displayed in bookmarks.

44. An issue is fixed with incorrectly displayed curly brackets in the comments when using the AJAX navigation for comments.

45. An issue is fixed where not all template tags of publication extra fields were correctly processed in the main.tpl template if a user visited a missing article.

46. An issue is fixed where {news-id} tags were incorrectly processed when displaying publications using {custom ...} tag if a user viewed a full article.

47. An issue with operation of [available ...] and [not-available ...] tags is fixed when a user is on a page of article by a symbol code, if the symbol code is not specified or is equal to zero "0".

48. An issue is fixed with the incorrect work of control system for incorrect friendly URLs in full articles if DLE was installed not in the site root directory.

49. An issue is fixed where articles planned for publishing in the future could be displayed when switching to following and previous articles, despite the fact that they set not to be displayed in the engine settings.

50. An issue is fixed where extra fields with gallery and image type could not be displayed when previewing an article if image descriptions were used in these fields.

This publication has no comments yet. You can be the first!

Users of Гости are not allowed to comment this publication.